Happy Father's Day! We are just hanging around the house and I'm making Fran his favorite meal for dinner. Are you doing anything special?

I did this page for Webster's a couple of weeks ago. It was inspired by Nicole Pomeroy, our June guest designer.

I had this photo of the family. These are always so hard to scrap, because of the mix of colors, but, I found that the Garden Gala papers went perfectly with it. The flowers are Prima and the gem word is Zva. 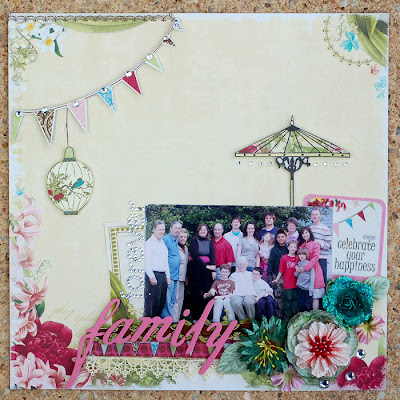 Yesterday was an exciting day for us. We adopted a kitten! He's adorable. 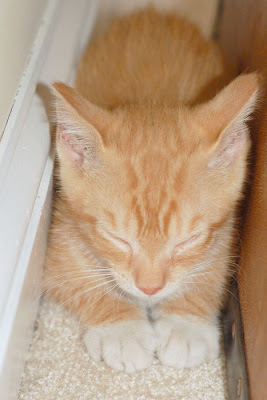 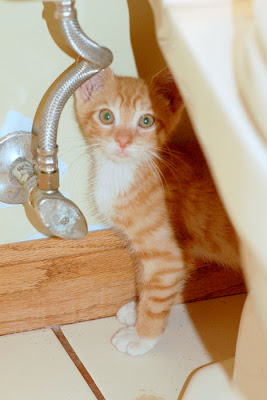 We had told Ryan that he could get one for his birtday, but back in April they were hard to come by. Then, we didn't want to get one before we left and have to leave it here alone. So, yesterday we went out and found him. We named him Pulu (pronounced Poo-Loo) after the Hawaiian Pulu Fern tree. We saw them on the big island. They have this really soft, orange fur like stuff on them, so we thought that would be a good name for an orange kitty. He's still really shy, hiding behind the toilet is his favorite place. But, he purrs up a storm and we're all in love with him! :)

That's all for today. Thanks for stopping by!
Posted by Anabelle O'Malley at 10:36 AM

Love this LO and the gem accents. We're anxious to meet the new addition to the family!

What a sweet name for your new little kitten! I am the human "servant" to three lovely calico cats and they make our days complete with their antics and loveable natures. Enjoy your new family member!

What a gorgeous layout girl! That little guy is beyond cute! I WILL NOT be showing your post to my girls. L has been bugging me to get another cat, actually a kitten, way too much lately. Maybe I will send her over there and she can play with yours. :) hmm...maybe I will come too. Miss you!

Lovely layout with a great family photo! Love your vacation pictures too, you looked so relaxed, bet you had lots of fun! I need one too! LOL!

what an adorable kitty you have adopted! Fabulous LO and it is great to see pics from your trip as well