Hello August and Hello REVERSE CONFETTI Fans!  It’s the 8th of the month –Blog Hop time!  I am so excited to be included in the fun! I have been a fan of Reverse Confetti since Jen released her first sets. Last month’s release was fantastic and today we are inspiring you with projects and cards using those stamps and any other previously released stamps from Reverse Confetti.  Along with the Confetti Crew (the fabulous design team), they've also invited some extra friends to join in on the action! Thats where I come in!

The hop started over on the Reverse Confetti blog, and you should have made it here from Laurie Schmidlin’s blog. It would be worth your while to start at the beginning of the hop, so you don’t miss a thing. We have tons of inspiration for you to see using all of Reverse Confetti’s amazing stamp sets!

I have several cards to share with you today. This first one uses Arrows n'  Elements. I used a couple of fun new Bella Blcd. die cuts and added some stamping to them. The little heart stamp was the perfect one to create a pattern for the cutout in the little card. 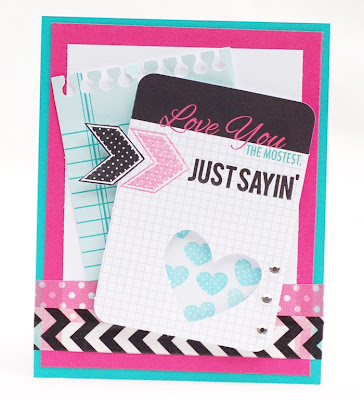 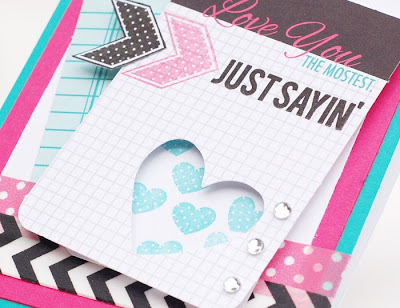 This next card uses the Celebrate Cake set. I was totally inspired by a card made by Betsy Veldman. You can see it here. I loved the idea of the inked vellum circles and thought they'd be perfect with the little cupcake stamp. 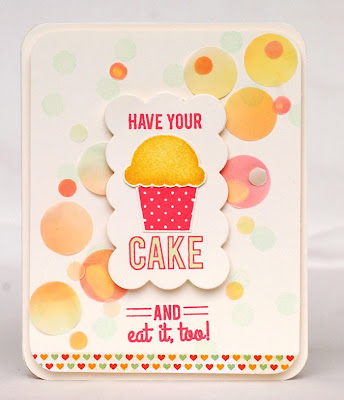 I made this one for my sweet sister in law, Patty. Hope she likes it. :) 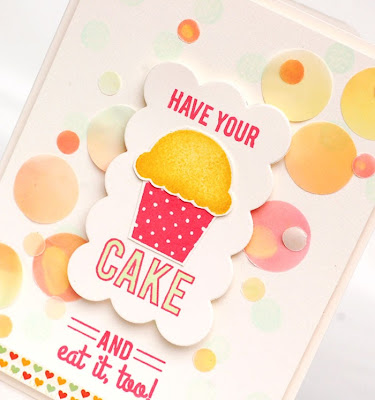 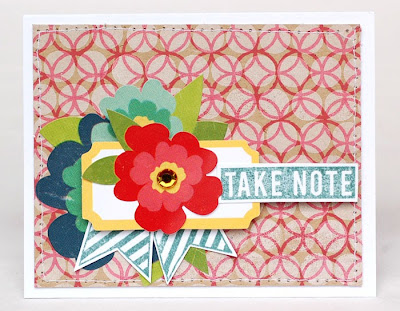 My final card is really simple, which usually isn't my style. But, given the burst of neon color, I like it.
I started off by using my neon Mr. Hueys in orange, pink and yellow. I squirted them on an acetate sheet and spritzed it with a bit of water. 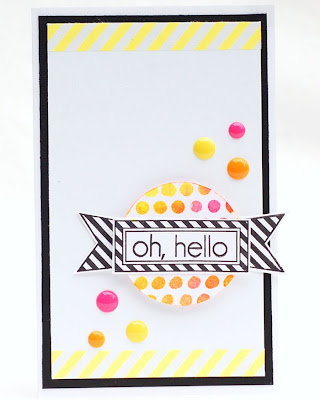 Then, I placed the solid circle background from  Whole Lotta Dots in it and stamped onto the white cardstock. I punched a circle from the background that this created. On top of it, I layered images from Arrows n'  Elements. I finished everything off with some enamel dots and washi tape from Freckled Fawn. 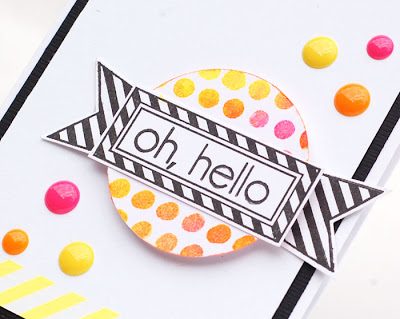 So, those are my cards. I really enjoyed using the stamps and combining sets as I made them.

How would you like to win some Reverse Confetti goodies of your very own?  Leave a comment on each stop along the way for a chance to win a $15 gift certificate to REVERSE CONFETTI. Comments are open until Monday night, August 12th at 11pm CST, and the winner will be announced on the Time for a Card Tuesday post on the 13th over on the Reverse Confetti Blog!

A few things before you hop along though, just to keep you “in the know”…

SKETCH FOR YOU TO TRY (SFYTT)—Play along with us each month for your chance to win the ENTIRE NEXT RELEASE and to be invited to play along with the Confetti Crew as we sneak peek and hop with all the new stamps.  Click HERE for more details and link list.

‘FETTI FINDS—Link your REVERSE CONFETTI creations to the link list posted on the Reverse Confetti blog each Monday.  (Note:  Reverse Confetti stamps are required for ‘Fetti Finds.)  A ‘Fetti Fave will be announced on the Reverse Confetti Blog from that months’ entries.  The ‘FETTI FAVE will receive the ENTIRE NEXT STAMP RELEASE and be invited to play along with the Confetti Crew as we sneak peek and hop with all the new stamps.  Click HERE for more details and link list.
Celebrate the creative side of you!

I  hope you’ve enjoyed hopping with us today. Be sure and hop with the Reverse Confetti Crew on the 8th of EVERY MONTH for more REVERSE CONFETTI inspiration! Now it’s time to hop on over to to the talented Savannah O'Gwynn's blog. If you get lost along the way, you can find the hop order and list of all the participating designers over on the Reverse Confetti blog.

Thanks so much for stopping by! :)

"What a delightful collection of cards! I loved something about each one, but my favorite was "take note" with its bright floral bouquet. Thanks so much for sharing your lovely and inspiring work!

FABULOUS, FABULOUS cards Anabelle - can't decide on a favourite as they are all gorgeous!!!

Love these cards and am so excited to see mine in person!

ack! totally cuteness overload. I loved these cards, all of them. so glad you were in on the hop, I was totally inspired. thanks for sharing.

Fantastic cards Anabelle! LOVE them all!

Oh my!!! These are ALL utterly fabulous!!! I'm especially drawn to the second one - the colors are just so happy and fun!!!

All your cards are fabulous....such awesome designs using the RC stamps...love all the colors, layouts, and details, too!!

Oh my, what a fabulous series of cards to showcase RC products! Thanks for sharing and inspiring!
c

Great cards. Love all the layering and love the Celebrate Cake set.

OMG, I love all of your bright adorable cards! I just love those arrows!!!

Oh, these are all wonderful, Anabelle!

Such fun cards (you certainly do go all out for a blog hop!) I especially like your last card with all the fun, colorful dots and enamel accents.

Very fun colors and patterns on your cards.

Such fabulous cards! Love the heart aperture on the first one, the colors on the second, and that awesome background on the third. That last one is the bomb with all that neon. So happy you're part of the hop!

oh my goodness...such fabulous eye candy...way to rock the stamps!

Whoa, really, really fun and a great use of those sets!

What a great bunch of cards, gorgeous! I think that my favorite is the second with the vellum circles, so pretty!

Super fun set of cards! Arrows and dots--two of my favorite designs!

Love your cards...you have a great eye for color!

Loved all your cards especially the last one. I liked your idea on using the Mr. Huey mists.

WOW! What a fabulous batch of creations!

Super...super FAB cards! Every single one! Such bright and cheerful colors! Who wouldn't love to get one of them in the mail! Thanks so much for the inspiration and sharing your amazing cards!

Wow! These are super fab! Love each and every one and I'm sure your sister in law will love her card:-)

I can't believe I have to follow this post--- OH MY! You have out done yourself! I LOVE LOVE LOVE each of these cards-- AMAZING! You are so talented! FABBBBBBBBY x100000000:) LOOOOOOOVE:)

Fabulous cards, but I was wowed with the last one in particular!

I love all your cards--they are all wonderful!

Fabulous cards Anabelle! Love the uniqueness of each one!
Thanks for sharing! Have a wonderful day!
Liz O.